A Year of Borrowed Men was deservedly short-listed for the 2016 TD Canadian Children’s Literature Award.

A Year of Borrowed Men 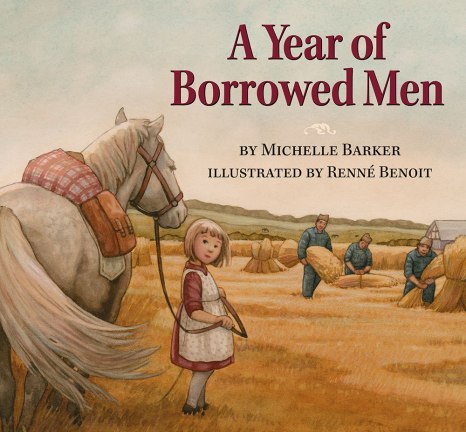 A Year of Borrowed Men tells a story from World War Two that will be unfamiliar to many readers, but is nonetheless a moving part of the history of the German-Canadian community. The author writes from her mother Gerta’s recollections, bringing to life the engaging voice of the younger Gerta, whose family hosted three French prisoners-of-war on their German farm in 1944.

World War Two from the German perspective remains somewhat problematic: how do we reconcile decades of erroneous equation of “German” with evil, with the real experiences of many Germans during the war? While the topic is dealt with effectively in some textsT– Roberto Innocenti’s Rose Blanche (1985), Marcus Zusak’s The Book Thief (2005), John Boyne’s The Boy in the Striped Pajamas (2006), among othersT– it will take so many more stories for truth to overcome the stereotypes. A Year of Borrowed Men contributes positively and significantly to our understanding of the compassion of some of the German populace, placed themselves in an almost untenable psychological and ideological situation.

Gerta’s father was “borrowed” by the German army, and in his place the government sent three French prisonersT– Gabriel, Fermaine, and AlbertT– to work the land. Gerta’s innocent narrative perspective ensures that the dark reality of Germany’s forced labour policy is not brought out. With the egalitarianism of young children, Gerta cannot understand why the three must live with the animals, and eat in the “pig’s kitchen,” where the slops were prepared. That was the rule though: these men were prisoners and were to be treated as such. Inviting them in to dinner one night almost sent Gerta’s mother to prison herself, yet the family could not deny their fundamental humanity. Despite regulations, in the face of threats, Gerta and her mother find little ways of making the Frenchmen’s lives more tolerable: extra butter on their bread, catalogues to cut into elicit decorations at Christmas, sneaking treats for them to eat. The men reciprocated with affection for their little German freunde: “I couldn’t keep the borrowed men here,” Gerta observes at the end of the war, “but we were friends– and I could keep that forever.” The story is made more powerful by the fact that Gerta did indeed keep that friendship alive: enough that her daughter has retold their story for her grandchildren’s generation to learn. 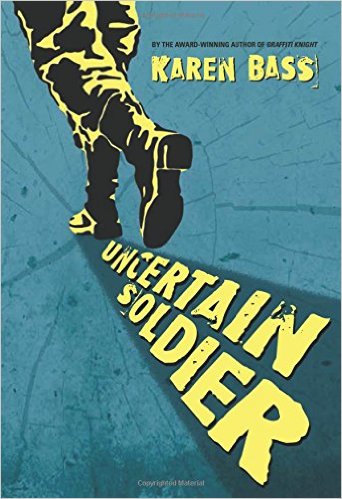 When I was young, I saw the 1978 movie version of Bette Greene’s Summer of My German Soldier (1973). Until then, I hadn’t thought about what “our side” did with prisoners of war. It was more obvious with Allied prisoners in the European or Asian theatre: the prisoners were held there, where the battles were being waged. (Hogan’s Heroes, the comic TV series that ran from 1965 to 1971, was also a popular entertainment of my youth.) Less traumatic than the American Summer of My German Soldier, Uncertain Soldier tells the story of Erich Hofmeyer, a German prisoner of war held in Alberta in the winter of 1943-44.

The story begins, though, in the voice of young Max Schmidt, a Canadian lad born of German parents, who is persecuted for his heritage and understandably struggles with his identity as a result. His father is almost violently insistent that Max remain proud of and stand up for himself and his German heritage. What Max is subjected to is impossible to stand against, though: a systematic, targetted bullying that readers will recognize as being a pervasive response to otherness, not just the product of war-time Canadian prejudice. When the bullying becomes life threatening, Max runs away. Max’s flight is the impetus for an act of bravery by Erich on both a physical and an emotional level, a distillation of the uncertainty that has been tearing at Erich throughout the novel.

Erich’s uncertainty regarding his conflicted national and cultural identities gives rise to the novel’s title. While Max’s struggle is the weft of the fabric of Bass’s narrative, Erich’s is the warp. Max is persecuted by his classmates; Erich’s very life is threatened by his complex position as a German national with British relatives, who speaks English perfectly and who silently rejects Hitler’s insistence on the superiority of the Aryan “race.” In the prison camp outside of Lethbridge where Erich is initially held, the Nazi party members rule as strongly as within the German army. Beaten close to death by those in power, Erich is granted a transfer to a work camp for prisoners deemed to be less of an ideological threat. Here, too, though, the dynamics among the prisoners is infused with mistrust of each other and of the Canadians the men work with. Some of the Canadians are generous and kind; others are resentful; and at least one person is filled with a hatred that leads to murderous intent. As both linguistic and cultural interpreter between the German prisoners and their English-speaking boss and fellow lumberjacks, Erich sees both honour and mistrust on both sides, and his honest, empathetic perspective makes him an ideal negotiator but also puts him in an almost untenable situation.

Uncertain Soldier is a solid, intelligent interpretation of the politics of the time and the effect of opinion on morale. Through the richness of its characters, the novel gives voice to a gamut of attitudes, revealing the complexity of life during the 1940s far more thoroughly and effectively than what is taught in history classes. In contrast to the Canadian Sam’s violent insistence that “a few firing squads last war would’ve fixed it,” Erich’s British grandfather astutely notes that “more mercy by the Great War’s victors might have prevented the fight that loomed” (103). The parallel with history is made more powerful by its subtlety; most readers will not hear Sam’s vehemence as an echo of French military politician Ferdinand Foch, who noted at the time that the Treaty of Versailles was “not peace [but] an Armistice for twenty years,” asking for harsher restrictions to be place on the defeated Germany. On the opposite end of the spectrum, Erich’s grandfather’s position is reminiscent of John Maynard Keynes’s insistence that the conditions were too harsh, that the Treaty was a “Carthaginian peace,” a peace ensured by the complete annihilation of the vanquished, such as Rome’s conquering of Carthage. Historians still debate the political “what ifs” of the first half of the twentieth century, and this uncertainty, manifested at all levels of society, is brilliantly woven into the fabric of Bass’s text. 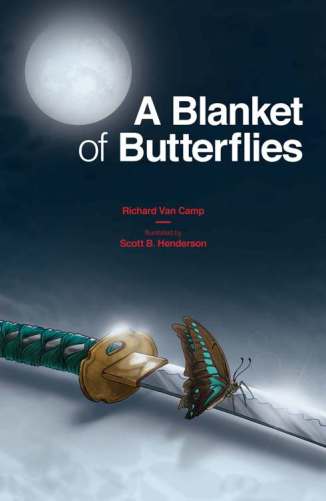 It is embarrassing that I have not yet read Richard Van Camp’s The Lesser Blessed (1996), which is purportedly a true classic of modern Canadian young adult fiction. My guess is that reading his short graphic novel A Blanket of Butterflies does not absolve me of the obligation, which I promise to fulfill asap… A Blanket of Butterflies really does make me want to run out and read everything by Van Camp. Not usually a fan of graphic novels, I nonetheless found the pace of the novel, as well as the balance between text and image, to be particularly satisfying.

A Blanket of Butterflies is mostly wordless. Unlike many graphic novels, the pictures tell most of the story; only dialogue is otherwise provided, which brings natural visual focus onto the space. In life, we do not have a narrator telling us what we are seeing around us: we need to look. Van Camp and Henderson create this same interaction: we hear the (written) words, but we must look to see what the characters are responding to in their (illustrated) world.

The story is simple and poignant, the somewhat predicatable ending notwithstanding. It tells of an affinity between the Tlicho First Nation of Fort Smith, NWT, where Van Camp himself is from, and the Japanese. The affinity stretches across history; the peoples are the same, the text asserts, in that they have suffered similarly at the hands of European economic and military imperialism. The story is certainly not as heavy-handed as this suggests, but it does cause the reader to reflect on the history of European Canadian treatment of the northern First Nations as a parallel to the American bombing of Japan at the end of the Second World War. (It doesn’t get into Japanese atrocities committed during the war, but like many other narratives— Eleanor Coerr’s Sadako and the Thousand Paper Cranes (1977); Joy Kogawa’s Obasan (1981) and the children’s version, Naomi’s Road (1986); Hayo Miyazaki and Isao Takahata’s movie Grave of the Fireflies (1988)—tells the story of the lives of the Japanese people devastated by a war that their government waged. Like all wars, for all peoples: the suffering is not discriminate.)

The museum in Fort Smith had worked hard to locate a Japanese man, Shinobu, who is invited to reclaim a suit of armour belonging to his family, pilfered at some previous time. It is agreed by both that the armour belongs with its rightful owners, but the sword, beautifully crafted by Shinobu’s great-great-grandfather, has been bartered off by a previous museum custodian. The immediate story tells how young Sonny, with the help of his Ehtsi (grandmother) and her knowledge of the ways of the Tlicho, help Shinobu retrieve the sword from the unsavoury “Benny the Bank.” You can see here the scope for action-packed panels as well as images of great peace and healing. The balance in content, like that between narrative and image, satisfies graphic novel aficionados in its ability to engage. 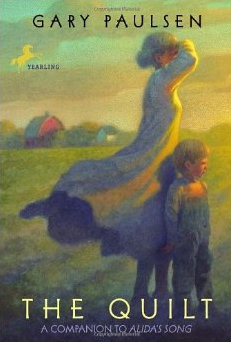 This is the third story Paulsen has written about his early life with his grandmother. It is a gentle, realistic story of a six-year-old boy helping his grandmother and her pregnant young friend on a farm in the woods of Minnesota during World War II, when the men were all away fighting. While an interesting and warm story, this feels more like a nostalgic journey for Paulsen than any attempt at telling the story to a reader. More interesting for biocriticism, perhaps, than as a story for young readers, although it is written for quite a young readership.