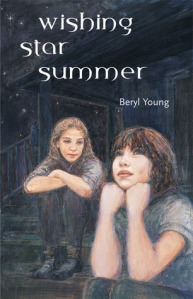 A simple text telling of the visit of a young Belarus girl suffering from the unhealthy atmosphere of the post-Chernobyl landscape.  Tanya comes to Vancouver on a relief program to stay with Jillian Nelson and her family, but despite wanting to have a friend badly, Jillian finds it difficult to be a friend. The story is written with a young beginning reader in mind (ages 6-8?)—or rather, the narrative voice is simplistic enough that older readers will find it too young.  The highlight of the story is not in the plot, but in Beryl Young’s insightful portrayal of the tensions between the protagonist and her Belarus guest: I don’t think I have ever read a text which manages to portray the protagonist so successfully as a jealous, spoilt, 11-year-old and yet retain my interest and affection for the girl.  The characterization of the other members of the cast is equally powerful, and raise an otherwise banal and predictable story to one worth reading and sharing.