How dare the 1970s Children’s Literature community reject Anne of Green Gables as a “classic,” because the success of LM Montgomery‘s novels was “viewed as symptomatic of their lack of serious value”?

Like Phyllis Reeve, the reviewer of Carole Gerson and Peggy Kelly’s Hearing More Voices: English-Canadian Women in Print and on the Air, 1914-1960, I was appalled to learn of such an opinion. I’m sure that readers of my generation (interestingly, those who would have encountered Anne in the early 1970s) absolutely considered Anne of Green Gables already to be a classic. Another favourite of the reviewer is children’s author and radio presenter Mary Grannan (“Just Mary”). This is undoubtedly why she opens her review with a foray into her childhood reading, and thus why I am posting here. In addition to including children’s authors, of course, Hearing More Voices presents more broadly “aspects of the lives and works of Canadian female writers and broadcasters within a tumultuous period during our socio-economic and political history: 1914-1960.” Like our CEWW project, the authors focus on lesser known writers who, whether they are children’s literature authors or not, are well worth reading about.

Away Running begins and ends with running away. The opening scene presents Matt (Mathieu Dumas from Montreal) and Free (Freeman Omonwole Behanzin from San Antonio, Texas) and some of their teammates on the American football team, the Diables Rouges, in Villeneuve, France. Villeneuve is a suburb of Paris noted for its mainly poor, immigrant population, and a concomitantly high level of racial tension. Taking a short-cut through a construction zone, the boys are stopped—unfairly accosted—by the police. Immediately, readers are immersed in the fear these teens face: they have done nothing wrong, but they know that doesn’t matter. They will be arrested. Their parents will be called. They will not be able to play in the under-20s championship final in four days. They run.

Matt, too, is running. His mother is an editor for a Canadian women’s magazine; his brother and sister have both been successful in business; Matt is similarly slated to attend Orford College—an excellent business school with no sports: no football. Stealing from his college funds, Matt runs to his football friend in Paris.

Free is in Paris on a summer-school study-abroad trip, on scholarship and feeling ostracized from his white classmates. When he meets Matt, and is given the opportunity to stay and play for the Diables Rouges, he jumps at the chance. But Free, too, is running from the reality of his life in the United States.

Much of the novel is taken up with the relationships among Matt and Free; Moussa (Moose), their closest teammate; the volatile Sidi and his sister Aïda; and the other teammates, who both respect the ’Ricains for their playing abilities and resent them for their privilege. Away Running demands not only that readers consider issues of privilege and race, but also that they understand how deeply embedded our cultural ethos lies, and how complicated intercultural and interracial interactions really are. The prejudice the Diables Rouges players and their community experience is not ultimately about race, pure and simple, as Matt learns. Despite being African-American, Free is not persecuted with Moose and Sidi and the other non-White players. Being foreign, regardless of colour, sets him outside of the cultural dynamics at play in the lower-income Paris suburbs at the same time as his race—as well as being from a similarly low-income, oppressed “hood” in San Antonio—allows him to understand those dynamics more than Matt can.

Issues of race, of cultural understanding, of teens’ social relations are set against the American football season in Paris. The Diables Rouges are a middle-of-the-pack team, and much of the boys’ growth in understanding results from their involvement in the team as they develop to meet their potential. What makes this more than a “there is no I in team” story is the true human messages that the authors impart through the carefully and very successfully developed characters. We really get to know not only Matt and Free, but Moose and Aïda, and the full cast of narrative support. We become fully invested in their lives long before the final scenes are played, before Away Running stops being about football at all, and becomes entirely about race, culture, politics, and police brutality. It was not surprising to learn from the Authors’ Notes at the back of the book that the final scenes are based on a real incident in France in 2005. It is to the authors’ great credit that the violence of the final scenes, the gross unfairness of the situation, flows seamlessly out of the entirely fictional characters and storyline they have created.

Away Running is a book about football, best suited for teenaged boys who will engage with the mentality and language of these fictional teenaged boys from the disadvantaged spaces of their cities. But it is far more than that: at its heart, it is a book about what it means to be human, regardless of class, race, or ethnicity. A football book that moved me to tears; I never thought I’d see that.

This review was first published in Resource Links Magazine, “Canada’s national journal devoted to the review and evaluation of Canadian English and French resources for children and young adults.” It appears in volume 21.1.

I really enjoyed Norah McClintock’s In Too Deep (2009), and in her second graphic novel, Tru Detective, she repeats her success in creating a fast-paced narrative of teen characters involved in mystery. In this instance, Truman Tucker and his best friend “Sticky” (Woodrow Stickman) are trying to solve Tru’s girlfriend’s murder while avoiding the police, who suspect Tru. As the story unravels, Tru and “Sticky” begin to learn that Natalia’s life was not as simple as they thought. Their investigations rake them into the world of human trafficking and illegal immigration, real-life issues that provide a heightened feeling of urgency to Tru’s situation. Still, I wonder about the trope of independence in many teen mysteries, and McClintock’s is no exception. In situations of real threat—people are shooting at Tru, the people who try to help him are murdered—even the most anti-adult of teens would not likely take on the world by himself. Despite Sticky’s strong (and effectively written) remonstrance, Tru does not go to the police with evidence to clear himself. It creates tension and provides plot opportunities, but it doesn’t ring true; the story is gripping, and the narrative tight, but Tru’s actions are somewhat unconvincing.

The writing is simple, as befits the graphic novel format, in which illustrations provide much of the emotion and action. In this, though, the illustration in Tru Detective falls short. The block shading and limited tones of grey make it difficult to determine action in the panels, and a number of effective comic techniques to present motion are missing. Background objects—trees, smoke, buildings—are given as much weight as important foreground items. Characters’ emotions are difficult to parse, or even detect, and body language is often not powerful enough. Overall, the graphic part of the novel does not do its job in the creation of narrative meaning. It’s a shame, too, because McClintock’s story could make a great high-interest, low-reading level novel for teens. Its panel format might be an attempt to reach that audience, but with action and emotion impossible to wrest from the panels, it does not reach this goal.

This review was first published in Resource Links Magazine, “Canada’s national journal devoted to the review and evaluation of Canadian English and French resources for children and young adults.” It appears in volume 21.1. 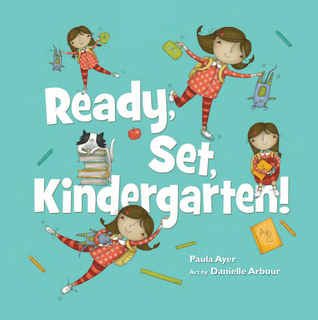 Ready, Set, Kindergarten! shows us a young girl excited about her first day of kindergarten, and (seemingly) the activities she finds there: getting ready, spotting letters in signs as she walks with her mother (assumedly to school); painting, cutting paper, playing outside, but then… “baking a cake with a bucket and sand” in her swimsuit. All of a sudden she is not at kindergarten, but in various other spaces: at the beach, at home in the bathroom, having a tea party with her dolls, in a play room fighting with a friend—because of course we need to introduce conflict so the character can have something to learn in terms of acceptable social behaviour, like being ready to say she’s sorry—helping with dinner, getting ready for bed, eating breakfast, getting dressed, going to kindergarten… wait, what? What was she doing on the first page, then?

The storyline is convoluted at best. While we follow the little girl though her day, we have been expecting something more to do with kindergarten than just being ready for various aspects of life (including kindergarten, which she apparently goes to the next day). Aside from the repetition of the word “ready,” there is no rhyme, nor rhythm, and the text becomes unmemorable. Children respond well to words that lilt, as much as to images that cause pleasure, sight and sound together resting in their memories or inciting their imaginations. While the illustrations in Ready, Set, Kindergarten! are delightfully lively and colourful, they do not quite redeem a text that has very little to recommend it.