Like her Tam Lin retelling, Fire and Hemlock (1985), this tale does not rise to the level of effectiveness that the Chrestomanci series or Howl’s Moving Castle (1996) does. The characters are all interesting, and the plot cleverly arranged and effectively sustained, but there are… it is hard to describe… just too many words. The narrative, like Fire and Hemlock, would have been more effective if reduced about 30% in length. While Diana Wynne Jones’s concept of multiple parallel universes is fascinating, this is not the best example of her use of that narrative paradigm. Sacrilege thought it may be in the world of children’s literature to suggest such a thing, I would love to have seen these of Jones’s concepts in the hands of a more adept author. 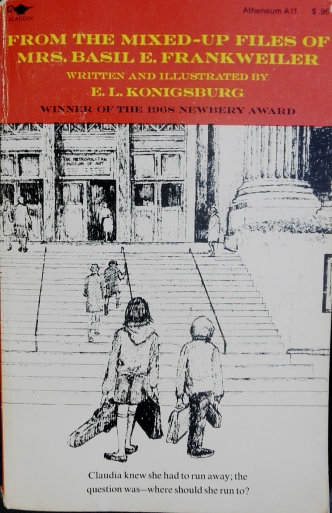 Feeling put-upon and ignored as the eldest sibling, Claudia takes her younger brother with her and runs away. Not liking hardship, they run to the Metropolitan Museum of Art in New York, rather than to the woods, as Jamie first assumes. There, they encounter a statue attributed to Michelangelo, and Claudia becomes captivated, needing to discover the truth about the statue for herself.

While a little slow-paced, this novel is superb in not stretching the possibilities in two young children who have run away from home. What they do could have happened; thus, the reader is able to engage completely with the mystery and the stresses the children encounter. The ending is hidden from the reader until the end, then well resolved.

I was not so very entranced with the novel, which (despite my personal opinion) is heralded as one of the true classics of American children’s literature. It won the Newbery Award for Children’s Literature in 1968 and, as the Wikipedia entry notes, “in 2012 it was ranked number seven among all-time children’s novels in a survey published by School Library Journal.” But then, I didn’t like Norton Juster‘s The Phantom Tollbooth (1961), either, despite the language play that normally would appeal. But there you have it: It’s not you; it’s me.

This review was first published in a shorter version in Resource Links Magazine, “Canada’s national journal devoted to the review and evaluation of Canadian English and French resources for children and young adults.” It appears in volume 22.1. 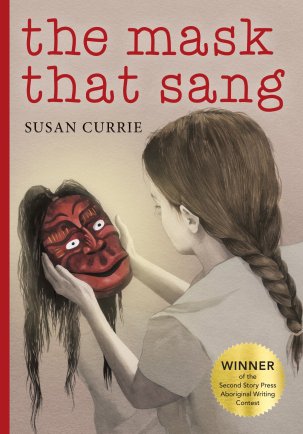 The Mask that Sang opens with Cass running from bullies, only to come home to learn that her mother had been fired from her sketchy job at a diner for standing up for another girl against the bullying boss. While suggests a message about bullying being endemic, the story is really about how Cass discovers her Native heritage.

Cass’s mother, Denise, has “been in over twenty foster homes” since she was given up by her mother at birth (10); as teen mother herself, she chose not to make that decision, and has raised Cass in a loving emotional security that transcends their poverty. When her dead mother’s lawyers track Denise down, she is adamant that she will have nothing to do with the house and money she has been left. Cass, however, does not carry the same emotional baggage, and talks her mother into accepting the legacy: the home and financial security Cass has always dreamed of. Wrapped up in tissue in one of the drawers, calling to her with a “mischievous purr” was an Iroquios false-face mask. The mask is responsible for the soft voices Cass has been hearing: “The hum was more like a song now … Maybe it was a voice in the wind, maybe it was several voices” (22) telling her how happy she will be in the house, coaxing her towards the drawer to be discovered.

The mask sings to her; it hums in approval when she stands up for a Native classmate, Degan Hill; it “vibrated with regret, with sorrow” (56) when she inadvertently hurts him; it gives her strength to stand up for what she knows is right. Befriending Degan brings Cass into the lives of his Native family, where she learns the stories of false face masks, and their power. When her mother unknowingly sells it with other unwanted household items, Cass and Degan struggle to retrieve it, first from a pawn shop, then from its purchaser, and ultimately from the school bully, Ellis, who turns out (stereotypically) to be dealing with issues of his own.

Despite the trope of the privileged-yet-bullied bully, the ingenuity of Cass and Degan, and their strength in standing up to Ellis’s father racism and illogical position vis-à-vis the mask, gives readers a sense both of the powerlessness of the child against unreasonable adults and the need to stand for what you believe in regardless. In a rather simplistic and idealized dénouement, their strength gives the abused Ellis strength; he returns the mask to its rightful home, and “generations of voices sang that it was home at last” (185).

Its rightful home, of course, is with someone from the Cayuga Nation, where it was created. That the mask sings to Cass is the first obvious clue. The method of delivery of the truth of Cass’s heritage, rather like Denise’s fortuitous inheritance, is rather contrived. A letter that had been left to Denise—which she threw out but Cass rescued—tells the story of Denise’s mother, a Cayuga girl, neglected by her widowed father and sent to Residential school, who (like Denise) chose better for her infant daughter. The letter itself is little more than a narrative list of all possible injuries experienced by Native children in care of the government, and reads more like an outline from a history lesson than a letter from a caring nurse. After she gives up her baby, Denise’s mother “traveled in search of answers, working as she went … she visited other countries and sought out quiet, holy places. She learned to meditate. She studied about great religions, and explored what it felt like to practice them. When she finally came home, she was ready to look at her own traditions…” (174). This passage, especially, rang false for me. I could not reconcile the previous description of her treatment with the resources necessary for such travel and learning, “working as she went” notwithstanding.

What I find troubling is that the Turtle Island Healing Centre that Denise’s fictional mother founded does possibly exist. There is a Turtle Island Healing Center in Flagstaff, Arizona (although that seems an unlikely candidate), and Turtle Island Healing and Wellness, part of the Turtle Island Native Network online, is a Canadian organization. As “Turtle Island” is a term for the world in some First Nations’ creation myths (significantly, for this story, Iroquois), it is also possible that the author has created a generic title for a Native healing centre. If the story of Denise’s mother is based on the founder of the Canadian program, on the other hand, a more careful description of her past—and perhaps an afterword explaining the historical reality—would be greatly helpful. As it stands, the lecturing tone of the historical information overshadows the delightful story of Cass’s life, and we are left wanting.

The intended age group for the picture book was listed in the competition literature as 9-12, which differs from my earlier assumptions in writing this review. 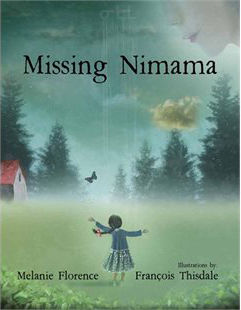 “Once upon a time there was a little girl, a little butterfly, who flew to the telephone every time it rang, hoping against hope that her mother was coming home.”

Missing Nimâmâ is a truly beautiful book. I’m not sure, though, who the audience is. François Thisdale’s illustrations enhance this poignant story of a young Aboriginal mother torn from her family in an unexplained way, like so many Aboriginal women in Canada have been. Kateri’s mother is lost; Kateri is being raised by her nôhkom, her grandmother, while her mother’s spirit watches over her.

The story is told in both voices. We hear the spirit of the young mother as she watches her daughter grow to womanhood. We watch as Kateri tells her own story as she matures under the loving care of her grandmother. We never learn what happened to Kateri’s mother; Kateri is a young woman, married, and expecting her first child when the call comes that they have found her mother. What happened is not the issue, though, so much as the years of not knowing, of growing up without a mother, or missing a daughter, a sister, a wife – and having no answers. The depth of this ongoing tragedy is hauntingly portrayed through Florence’s poetic words and Thisdale’s evocative illustrations.

But to return to my earlier question: who is this book for? It is truly beautiful, but perhaps too powerful for young readers, even if presented through the filter of an adult reader. But who am I to say? I have not lost a mother; I have not needed this story. And it is a story that needs to be both told and heard.