I read this book once. Only once. Ever. While it is (or at least was) a classic of European children’s literature, it has certainly not aged well. I cannot bring myself to read it again to review it, so what follows are my recollections from reading it oh-so-many years ago. This might be unfair, but the novel stands out for me as one of the great literary disappointments of my life. For the story of the Swiss Family Robinson—a family marooned on an island who MacGyver together a fabulous treetop home—is the stuff of magical imagination. It speaks to the heart of the child who built elaborate road systems for little cars, and dreamed of a toy train set, just for all those fabulous track junctions… Not so the novel as it was written. Or rather, as it was translated into English by William H.G. Kingston in 1879, which is the edition I read.

Granted, the idea of racing on the back of an ostrich is appealing to the adventurous child, I think no modern reader—young or old—would be able to get past the Robinson family’s habit of killing an animal in order to determine what it is: “Oh, look, what an amazing, elegant, beautiful creature: let’s kill it.” And while the notion of building an elaborate treehouse from the ground up, so to speak, really does appeal to the engineer in all of us, the glory of bamboo-punk does not outweigh the boredom resulting from the stilted writing and the episodic narrative. But remember, this is a novel of its time and culture. The mechanical engineering that I admired so much is now a solid stereotype about Swiss and German cultures, and the penchant for killing animals just because they could was sadly common amongst European and British explorers—and imperialist conquerors—of the time. Remember the dodo? Or the herds of buffalo shot by men riding past on the railroad? Or the tiger, hunted almost to extinction? It is hard, with modern knowledge of how we have devastated the natural world, to engage completely with The Swiss Family Robinson.

So I no longer even have this novel on my shelf, but I will hold it forever in my mind as an example of the fact that, while literature can tell us so much about a time and place, that doesn’t mean we have to like it.

(So popular was this story that there are numerous “in words of one syllable” editions and other such accessible versions.) 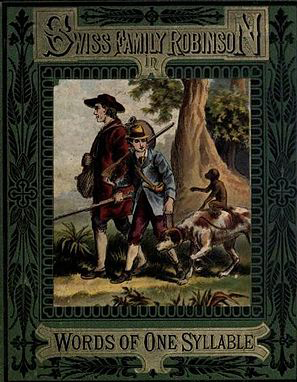